Post winter inspection: Does your roof and guttering still make the grade?

South Australia enjoys a wonderful temperate climate, but our homes are still regularly subjected to the forces of nature, testing the very limits of even the sturdiest constructions.

One of the most important structural components of any home is the roof and guttering, which together, ensure your home stays dry and secure in even the most extreme weather. But time and damage can eventually result in this waterproof barrier being breached, leading to serious structural damage.

Spring; a great time to inspect for signs of damage

A good practice for every homeowner is to regularly inspect the roof and guttering for signs of weather damage or age related deterioration, and the perfect time to do it is spring. The skies are clear, and the ravages of winter storms are gone for another year.

Roofing and guttering generally last many years, but when weather related damage or deterioration begins, the external signs that indicate something is wrong can often be quite subtle despite significant, but hidden structural damage already developing.

Structural damage from a leaking roof or failing guttering system can result in permanent damage to foundations, roof and wall timbers; irreversible ceiling, internal wall and carpet damage; water penetration into electrical wiring and light fittings; and even a complete or partial ceiling collapse.

If you don’t feel comfortable about climbing ladders, or you would like a professional opinion about the condition of your roof or guttering, we would be more than happy to send one of our trained Roof Technicians to conduct an obligation free inspection. 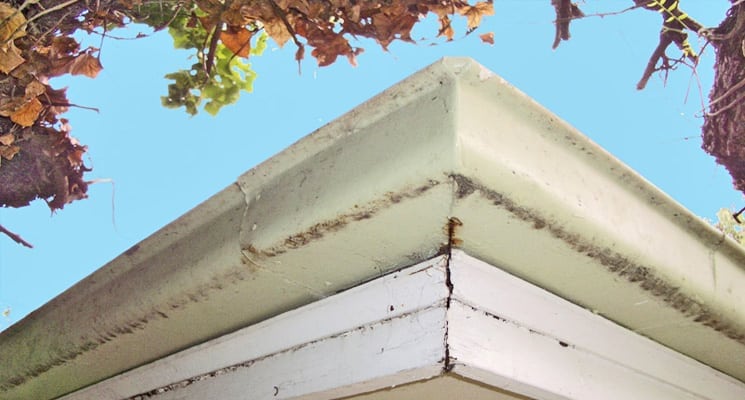 Dirty marks may be seen forming on the timber and scotia beneath the gutter. You may also see rusted nails in the Scotia, a tell-tale sign that moisture is trapped behind the timber.

To the untrained eye, these symptoms may seem like a problem originating in the timber, but they are almost always caused by a leaking corner or join in the gutter. These subtle marks can take up to 20 years before they begin to appear, and may seem relatively harmless, but beneath the surface there is a potential catastrophe unfolding.

The continuous seepage of water from the gutter becomes trapped behind the scotia and fascia. Because of the absorbent nature of timber, the trapped moisture is drawn into the fibres of the timber causing wood rot. This fungal disease completely destroys the structural integrity of the timber, eventually causing it to collapse, often without warning.

Point to remember: If you see dirty-marks or water-marks on your fascia or scotia, and it’s near a join or a corner of your gutters, you can be almost certain that water is leaking from your gutters. 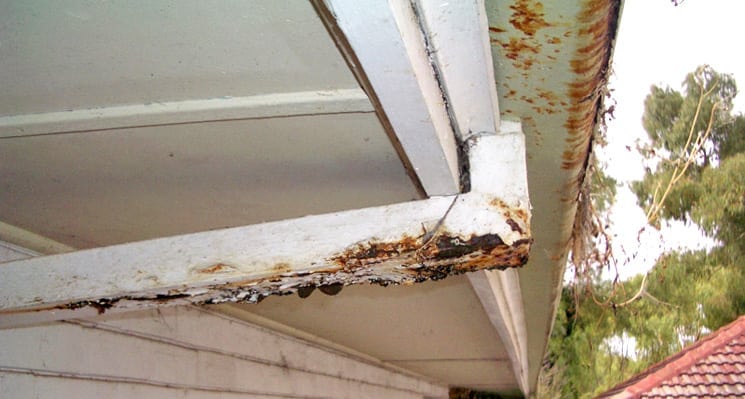 Advanced symptoms of rusted guttering and water damage can become very obvious after only just a few years of constant leaking.

Once guttering has reached a stage where it has rusted through and falling off the fascia, it not only becomes completely ineffective at channeling water away from your home, there is also the very real risk of it collapsing and causing physical injury.

The longer guttering is left in this state, the more extensive the damage to your property. Water running into the foundations of your home can create serious structural problems. Timber fascia’s and scotia can become so damaged by wood rot that they will all need replacing. There is even the risk that wood rot can spread into major timber structures such as the ends of roof trusses.

Guttering is like any maintenance problem in your home. The longer you leave it the more damage it is going to cause, and the more complex the problem becomes.

If you can see rusty guttering, water dripping under carports and verandahs, or there is any evidence of water damage to timberwork, you know that urgent attention is required to prevent serious structural damage. It really is time to call in the experts.

The first thing to look for on an iron roof is signs of rust. At first, there may not be any obvious patches of rust, simply a dark or rusty looking streak appearing on the roof surface. Even the smallest indicator is a sign of a much larger problem. By the time rust finally breaks through, there is usually a large part of the iron that has been compromised by sub-surface rust.

Keep a look out for missing or raised roofing nails or tek screws. If you spot one, then you can almost be sure there will be more, particularly on old roofs that are fixed with roofing nails. Even if the roof looks in place despite the odd missing nail or screw, there is a strong risk of leaks as the roof is no longer sealed. There is also the risk that wind can get under the sheet and lift it off the roof altogether, and without warning.

It goes bang in the night

At times, you may also be able to hear the occasional tell-tale sounds of a sheet of iron banging in strong wind, or when the wind direction is coming from an unusual direction. The banging will confirm that one or more sheets are unsecure and need to be fixed quickly to prevent damage to your home.

It is very rare that an issue with an iron roof is localized to one area. Once symptoms begin to show in one area, it’s only a matter of time before they show across the entire roof. The most effective solution is to replace the roof before water leaks lead to structural damage.

Tiled roofs are amazingly durable, but they do deteriorate over time due to the suns relentless baking over many years. There is also movement caused through the roofs own weight, and expansion and contraction of supporting timbers due to daily temperature variations, particularly in summer.

So what do you need to look out for?

The sight of ridge caps that have moved and mortar that has been partially or completely displaced is a common sign that the roof is in need of repair. Not only is the risk of leaks high, but if an unsecure ridge cap was to suddenly slide down the roof in heavy rain, serious flooding could occur from just one rain event.

A cracked tile is a certain cause of roof leaks. Often, the tile will be cracked the full width of its surface, particularly if someone has stood on the unsupported centre. There may also be seemingly harmless cracks or breaks across the corner of a tile. Both will leak and need to be replaced.

Cracked tiles can be hard to spot, and may appear to be nothing more than a dark line across the surface. Over time, the crack will continue to open as the tile separates, turning a few drips into a serious leak.

During the inspection, you may notice that your tiled roof is becoming covered in mould and grime, which seems to get a little worse each year. While this won’t cause your roof to leak, it is very unhealthy if you use the collected water to drink or wash clothes and dishes. A roof in this state is covered in pathogens and fungal spores. As the coating of mould and grime worsens, the self-cleaning characteristics of the tile are lost and the surface becomes an organic layer.

Restoring your roof to its former glory

Most tiled roofs eventually reach a point where most, if not all of the symptoms we have just discussed are visible, indicating that it’s time to do something about it. Fortunately, it is possible to restore a tiled roof to its former glory aesthetically and functionally. To find out more, take a look at our Roof Restoration page.

A hidden but serious problem is damage to the concealed structural timber supporting the roof. This can be indicated by a localized sag in a part of the roof, or just a lack of uniformity in the overall appearance of the roof. Tiled roofs are extremely heavy compared to an iron roof, so when structural timbers like roof trusses are damaged – such as through White Ant infestation or Wood Rot – the load is forced onto other timbers, creating an ever expanding structural problem.

While timber repairs to the existing tiled roof are possible, many homeowners preferred solution is to have the tiled roof converted to an iron roof.

Spotted a roof or guttering problem?

If you have spotted a roof or guttering problem, and would like a professional opinion, you are welcome to make an appointment with one of our Roof Technicians. The inspection is obligation free, and gives you the opportunity to have an expert assess the problem.

If it needs fixing or replacing, they can advise you of what needs to be done, and the available options. They will also give you a written report following the inspection, which includes any costs involved to repair or replace your roof.