The risky consequences of doing nothing about roof leaks

By the time you become aware of roof leaks or gutter leaks, there’s a strong chance they have been developing for years, and may have already caused significant structural damage that is simply not visible from the ground.

Doing nothing creates a significant risk of sudden and catastrophic damage to your home and possessions in extreme weather. Left long enough, irreversible structural damage can mean a major, and unavoidable repair bill.

Over the years, we have seen hundreds of homeowners suffer unnecessarily, simply because they didn’t respond to the first signs of water leaks.

The first indications of a leak may be nothing more than a subtle streak of water running down an interior wall, or there may be an annoying drip in the middle of the room.

Sometimes the only clue is a sudden loss of power. If it’s been raining, and your neighbours still have power and you don’t, there is a very good chance that water has shorted out some electrical wiring.

Any water that penetrates the home needs to be take seriously as it may be just the tip of the iceberg as far as damage is concerned.

What water damage can do to your home 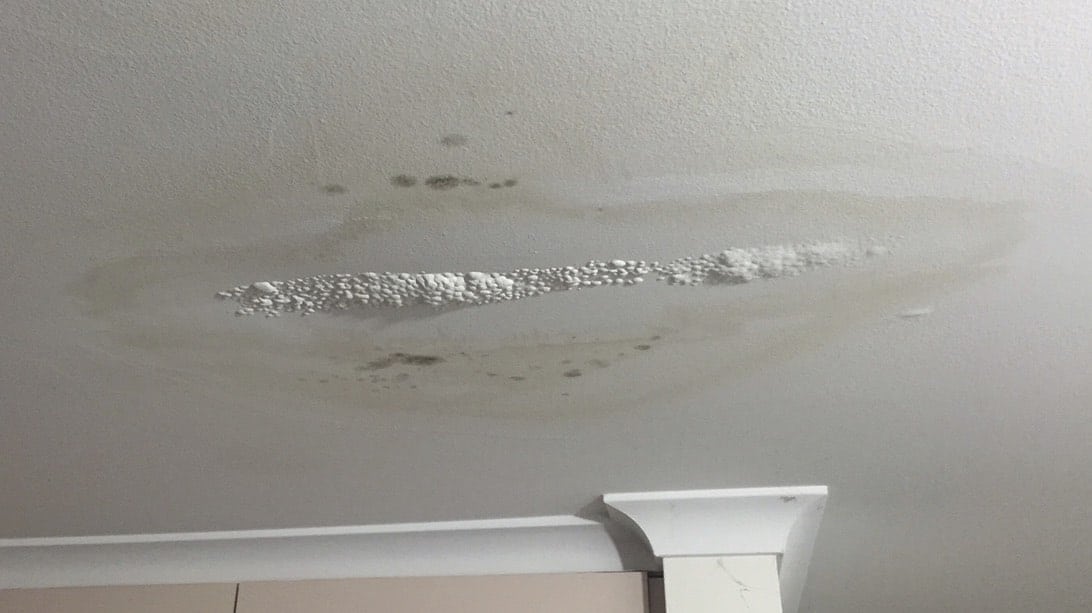 Plasterboard ceilings and walls are extremely vulnerable to moisture damage. They are highly absorbent, and any moisture completely degrades the inherent strength of the panel. Moisture also adds an enormous amount of weight to a material that is designed to be dry and relatively light weight. The added weight and degraded lateral strength can cause ceilings to collapse without warning.

Moisture also causes the panels to swell, distorting the smooth surface and alignment with other panels, leaving no alternative but to replace them.

Even when wall panels don’t appear damaged, they will need to be removed so that wet insulation can be taken out and the timber frames left to dry to prevent any long term damage.

As the lowest point in the home, floors become the inevitable collection point for any water that has found its way inside the home. Some carpets can be saved by getting a professional carpet cleaner in to remove the water and clean the carpets immediately. Others are impossible to save.

Laminated timber panels that have been laid over a concrete floor are also very vulnerable to water damage. Saving this style of floor requires immediate action, and is definitely a job for the professionals who use purpose built drying equipment to remove any moisture.

If you are out of the home and unable to move furniture or electrical equipment such as computers, TV’s and sound systems, a little water can do a lot of damage.

Mould is an insidious problem that you may not notice at first. It can cause a range of health issues, including allergies, and respiratory and skin problems. For the young, elderly or anyone with a suppressed immune system, mould can become a serious health risk. Some strains are so highly toxic that they can even prove to be fatal.

Mould can cause irreversible damage to ceilings, interior walls, insulation and floor coverings.

When mould begins to form on the absorbent surface of walls and ceilings, it is almost impossible to eliminate completely. While bleaches and commercial mould sprays eliminate the mould from the surface very effectively, the spores that remain buried deep inside the panels eventually cause the mould to resurface as an ugly black stain.  Not only is the mould unsightly, it causes paint to lift and damages the surface of the plasterboard.

Some strains can even cause structural damage. The fungal spores penetrate the surface of the supporting  timbers causing Wood Rot that turns the timber into a rotted pulp.

Wall insulation is also a major health problem if it becomes wet. Trapped within the wall cavity, insulation acts as a huge sponge that absorbs moisture, and is never able to dry out due to a lack of circulating air, creating the perfect environment for mould to flourish.

Termites live on cellulose based materials such as wood, books and vegetation. They also thrive in a humid environment. Timber wall frames that have become wet, and are unable to dry out due to lack of  air circulation and being in constant contact with moisture retaining insulation, create a perfect environment for Termites.

Once a Termite colony becomes established in a home, they are capable of consuming vast amounts of cellulose material in a very short period of time. They can quickly decimate a timber wall frame and move seamlessly into the roof cavity via intersecting roof timbers.

Possible causes of leaks, and signs to look for from the ground

While the exact cause of water leaks are often hard to find, there are several basic checks you can do from the ground to try and spot the source, and if you don’t have a problem, to make sure that your roof and gutters are in good condition.

Metal roofs are incredibly durable, but they don’t last forever. Any Indication of rust is a sign that a roof needs to be replaced, particularly where the sheets of iron overlap. You may also see signs of rust around nail holes. Other tell-tale signs are loose sheets that tend to flap and bang in strong wind. Missing and raised nails are also a sign that there are serious problems with the roof. 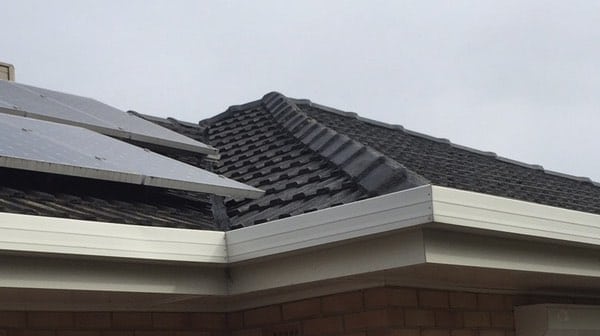 Tiled roofs don’t really wear out, but they all eventually need a bit of maintenance to stop leaks and restore them back to their former glory. Water leaks are mainly due to the mortar cracking and coming loose along the ridge capping, which you can see clearly from the ground. Occasionally, a tile can crack, and movement of the roof can also increase gaps that become vulnerable in strong winds and driving rain. 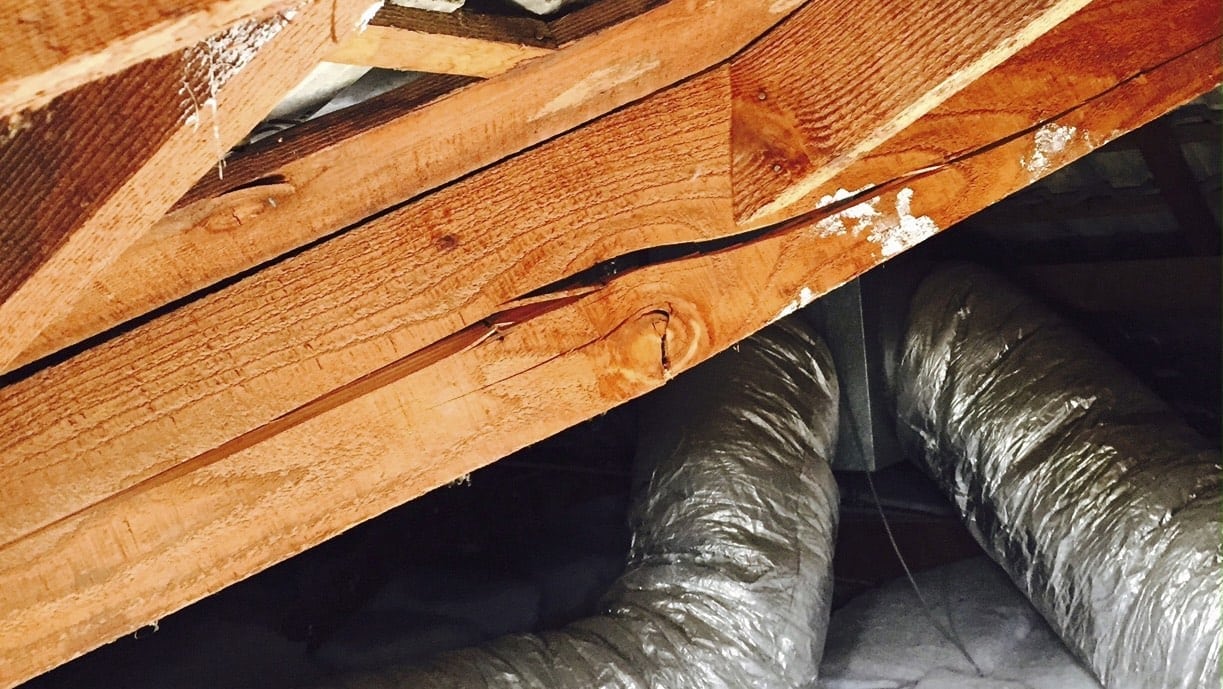 In some cases, there are even structural timbers that crack and break under the extreme weight of the tiled roof. The damaged area moves and becomes uneven, compromising the watertight integrity of the roof.

Signs that your guttering is the cause of water leaks and flooding are not always so obvious. You may notice a gutter overflowing in heavy rain. There may be nothing more than a few spots of rust that are concealing a much bigger problem. A section of gutter may not appear to be ‘hanging’ quite right compared to other sections, or you may notice that the scotia underneath the gutter has collapsed or appears damaged. The only clue may be nothing more than a rusty coloured streak under the gutter.

All of these clues indicate that the guttering is in poor condition, and will probably need to be repaired or replaced.

Think you may have a problem? Arrange a free inspection now, before it’s too late.

The key to preventing significant structural or property damage to your home is to act early. Many homeowners think they can simply keep an eye on a problem, but sadly, some of the worst water damage happens when they are not even home. Strong wind and heavy rain don’t wait for you to get home from work or return from holidays.

If you think your home is at risk, call 08 8369 3633 to arrange for one of our experienced Roof Technicians to take a look at your roof or guttering. The inspection is free, and there is definitely no obligation, whatsoever. What you will have is a detailed inspection report and total peace of mind.